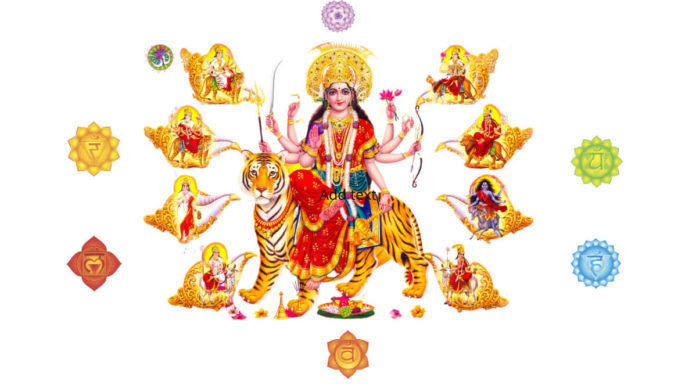 Navratri is being celebrated all across the Indian subcontinent and in Hindu communities the world over with full enthusiasm. The nine days of Chaitra, Ashad, Ashwin, and Maagh are important for Shakti believers. Among four Navratri’s, Chaitra and Shardiya Navratri are most popular. Many divine devotees only observe Aswin Navratri that is Shardiy Navratri.

Chaitra Shukla Pratipada also celebrated as Gudi Padwa and Ugadi in different states of India. This day is considered as the New Year as per Vikram Samvat calendar.

This festival is 9 days long celebration. Navratri is dedicated to nine divine forms of Maa Durga. This festival symbolizes victory over evil. Everybody of us has positive and negative tendencies. The battle between the two is an ongoing process that can only be won when we awaken Chetna inside us.

The pure bliss generated when we invoke the latent energies helps overcome the vices we have inside. These dormant energies can be invoked by praying to Maa Durga. She is the supreme energy of this creation.

The nine-day festival commemorates the nine forms of primordial energy, which is believed to be the source of creation.

Nine manifestations of Maa Durga or Shakti can be pleased by specific mantras and offerings. Here are the Nine avatars of Shakti and the mantra for each day of Navratri for seeking blessings from them.

The first manifestation of Maa Durga is Shailputr. Shailputri is the daughter of mountain king Hemavan. She is the consort of Lord Shiva. She rides Nandi bull. In Puranas, she is depicted with two hands holding Trishul in her right hand and lotus in her left hand.

Shailaputri represents the earth element; therefore, Shailaputri is the mother nature who is the cause of all the earthly existence.

Offering pure desi ghee to Maa Shailputri eradicates the illness and disease from the life of devotees.

Maa Brahmacharini worshipped on the 2nd day of Navratri. She is portrayed wearing a white sari and holding chanting beads in her right hand and Kamandal in her left hand.

She did hard austerity to get Lord Shiva as her Husband therefore known as Brahmacharini. She is considered to be the feminine form of Brahma and seeks to attain Vedic knowledge.

She controls Swadhisthan chakra in the body.

An offering of kheer ,mishri, or sugar is made to Maa Brahmacharini. She bestows devotees with knowledge, wisdom, and wealth.

Chandraghanta is a ferocious and married form of Parvati. She wears the half-moon on her forehead. She has eight hands holding a Trident (Trishul), mace(Gada), bow-arrow, sword (Khattak), lotus flower, bell(Ghanta), and water pot (Kamandal), while one of her hands remain in Abhaya mudra(blessings posture).

She is beautiful, charming, and valiant. She is brave and courageous and uses the lion as her vehicle.

This charming and fierce form of Durga is pleased by offering milk, sweets, or kheer. By her blessings, all the sins, troubles, and physical sufferings of the devotees are eliminated.

Mata Kushmanda is the 4th form of Maa Durga. Kushmanda is shown with ten hands holding a trident, discus, sword, hook, mace, bow, arrow, and pot of nectar. Her one hand is depicted in abhayamudra, from which she blesses all her devotees. She rides on a tiger.

Maa Kushmanda produced the cosmic egg(anda) with her divine smile. She is the ultimate energy inside the sun and brings light to illuminate the world.

Her abode is Anahata chakra.

Observing fast and offering the bhog of malpua to maa Kushmanda fulfill all desires of Devotees and increases the intellectual power for right decision making.

Maa Skanda Mata is the Fifth avatar of Maa Durga; when Parvati became the mother of Skanda or Kartikey, she came to know as Skandmata. She is portrayed with four hands holding lotus and Kartikay in her lap. Another hand blesses his devotees. She rides a lion.

She is a goddess of love and affection. Those who worship her get grace from Mata and her son Kartikeya.

Her abode is in Visuddhi chakra.

A bhog of banana is offered to the Goddess. She bestows her devotees with good health, strength, and wealth. Seriously devoted sadhakas of her get salvation.

The sixth form of Maa Durga is Katyayani. She is the daughter of rishi Katyayani, hence known as Katyayni. Katyayani is a warrior form of Durga who slew demon king Mahisasur. Her four hands carry different objects, lotus and khadak in rights hands and the other two left hands show varad (boon giving) and Abhay mudra.

Offering honey to the fierce Goddess is very auspicious. She is a giver of knowledge, courage, and peace of mind.

She is associated with Ajna chakra, which is also known as third eye chakra. Concentrating between eyes can invoke her blessings.

Maa Kalratri worshipped on the Seventh day of Navratri. Kalratri is a most ferocious form of Maa Durga. She is also known as the slayer of the most dangerous demon Cand and Mund, thus came to know as Chamunda. Subhankari is her other name which means she provides auspicious results to her devotees.

The complexion of the Goddess is extremely dark like night, and her hair is long and open therefore known as Kalratri. She is depicted with four hands, of which the left two hands hold a khadak and a Vajra(thunderbolt), and the right two are in the varada (blessing) and Abhay (protecting) mudras. Kaalratri has three eyes. Her vehicle is a donkey.

She resides at Shashrar chakra, also known as the crown chakra. Sadhakas and tantric gives utmost importance to the seventh day of Navratri since she bestows her devotees with siddhi and Nidhi(Knowledge, wealth, and power)

Sweets made from jaggery are her favorite offering. She provides protection from ghostly hurdles, evil spirits, and negative energies.

Maa Maha Gauri worshipped on the eighth day of Navratri. She has an extremely fair complexion; due to this reason, she gets the name Maha Gauri. She is beautiful and charming. She has four hands and three eyes. Two of her hand holds trident and tambura while other two are in varada and Abhay mudra. Her mount is bull.

Offering coconuts to Mahagauri fulfills all desires and gets relieved from the suffering and illness. If a childless couple donates coconut to brahmins on this day blessed with a child by the grace of the Goddess.

Maa Siddhi Datri is the ninth manifestation of Maa Durga; she is para Shakti worshipped by Lord Shiva. She gave siddhi to Lord Shiva; therefore, she gets her name as Siddhidatri. She, along with Shiva, runs the entire universe in the form of Ardhnarishwera.

She is seated on a lotus and has four hands occupying mace, lotus, Sudarshan chakra, and Sankha.

An offering of sesame seeds( til) is very auspicious. She removes all hurdles from the life of devotees and grants siddhi. Sadhak, who seeks divine knowledge and salvation, worships her.

In a nutshell, Navratri brings opportunity for cleansing body, mind, and soul from the toxicity of food, thoughts, and negativity. Maa Durga slays demons sitting deep inside us. By invoking her divine energies within us we can transcend our physical, and mental boundaries. 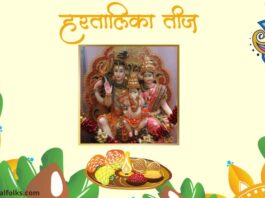 Everything you need to know about Hartalika Teej Vrat Katha and... 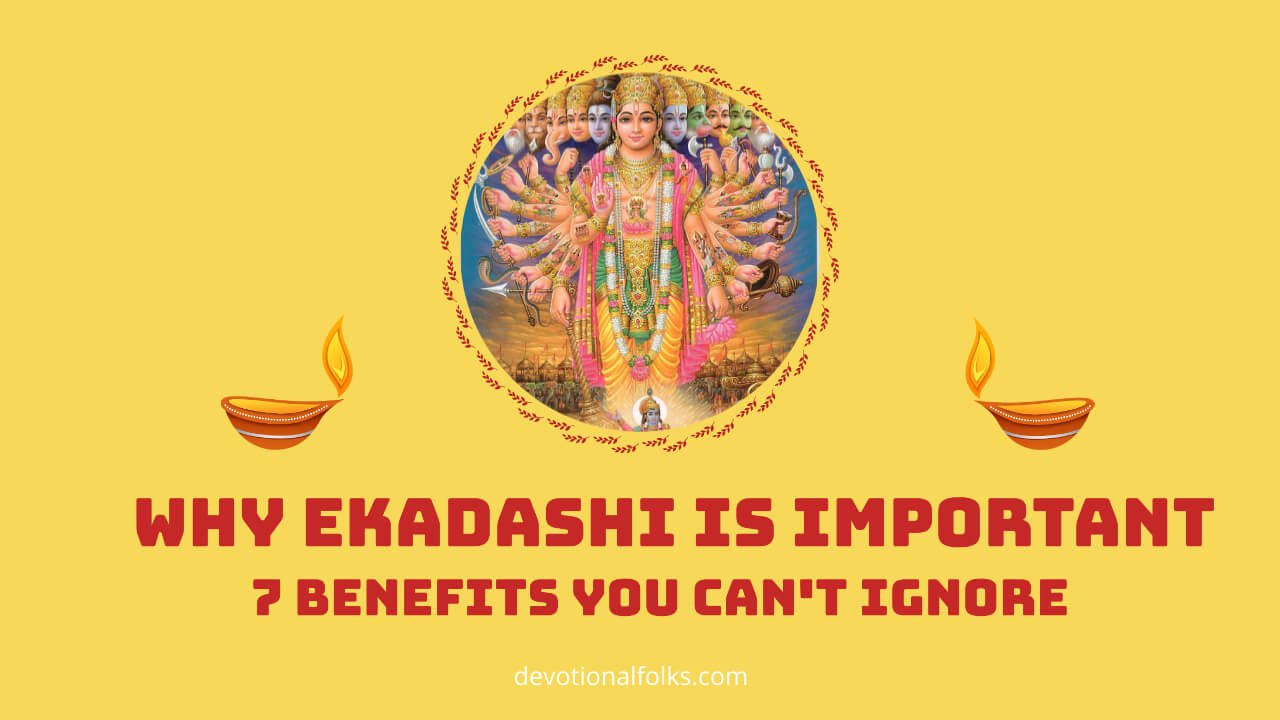 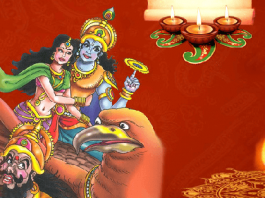 ABOUT US
Devotionalfolks is platform where you will find information about Hindu festivals , Vrat, popular strota and Aarti.
Contact us: contact@devotionalfolks.com
FOLLOW US
© devotionalfolks. All Rights Reserved
Go to mobile version