Home Festivals and Vrat Everything you need to know about Hartalika Teej Vrat Katha and Pujan... 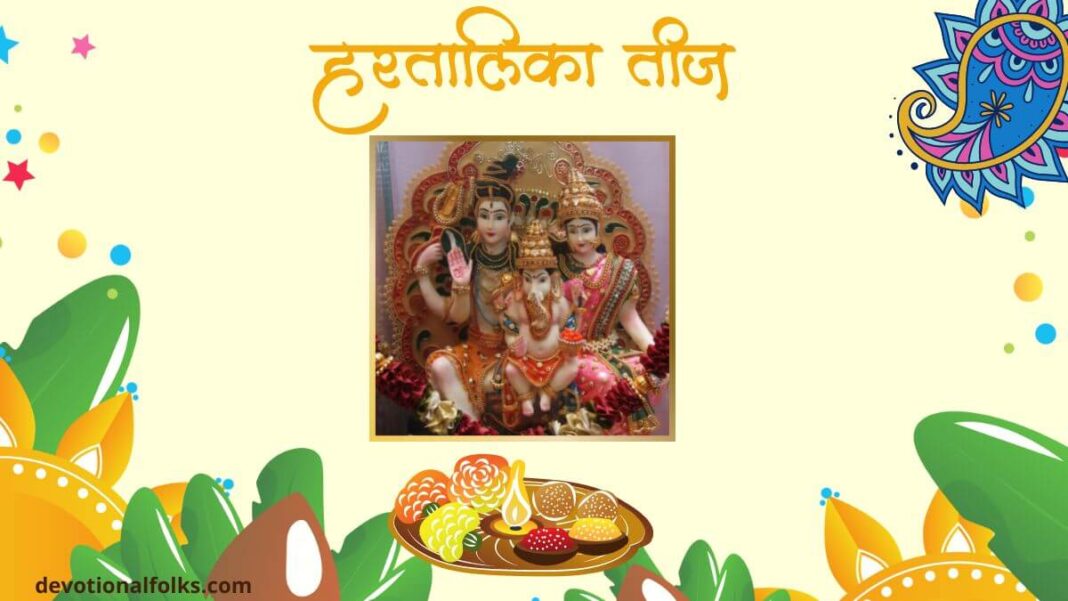 India, which is Bharat, is famous for diversity which is not only reflected in culture and traditions but how different festivals have been celebrated in different parts of the country also gives a clear picture of unity in diversity. Hartalika Teej vrat is a famous vrat festival that is observed by women and girls in almost every part of India.

Haritalika Teej vrat is one fasting festivity that is celebrated in almost every part of India be it north, south, east, or west. In northern parts such as Uttar Pradesh, Uttarakhand, Bihar, Jharkhand, Rajasthan, Chhattisgarh, and Madhya Pradesh, it is celebrated as Teeja. In West Bengal and Sikkim, as Hartalika teej. It is known as Hartalika Tritiya Vrat in Maharashtra and Kevda Teej in Gujrat. In the southern part such as Tamil Nadu, Andhra Pradesh, and Karnataka, it is popular as Gowri Habba. Other than India, the women of Nepal also keep this fast.

Teej means the third day in the Hindu lunar calendar. So there are different Teej celebrated across India such as Kajri Teej, Hariyali Teej, and Hartalika Teej which fall in the Shravan and Bhadrapada months of the Hindu calendar. Haritalika teej is observed on Tritiya or third day of Shukla paksha or wanning phase of moon in Bhadrapad mass. This festival comes in August or September month.

This vrat gets its mention in the Bhavisyottar Puran. Mata Parvati kept this vrat for getting Lord Shiva as her Husband. Haritalika Teej vrat is one of the most pious and popular fasts among women and unmarried girls. By the way, its a very difficult fast because its a Nirjala upvas. Nirjala upvas means keeping fast without having water. Unmarried or married women of all age groups pray and keep nirjala upvas to seek the blessing of Goddess Parvati.

According to scriptures, “भाद्रस्य कजली कृष्णा शुक्ला च हरितालिका ||” Hartalika falls on third day(tritiya) of wanning moon of bhadrapad month while kajal falls on tritiya of waxing phase of moon.

The timing of puja depends on the muhurat, most people do the pooja in pradosh kalam which means in the evening but morning muhurats also be followed sometime.

On the day of tritiya tithi, the woman who is observing fast should take bath of amla and sesame. After the bath ritual, dressed in fine clothes she should take sankalpam after reciting this mantra:

After sankalpam, she should collect and arrange the puja samgri like sand or clay made Shiv Parvati idol, shringar samgari like bangles, sindoor, kumkum, mehndi, Alta, etc. Flowers, mishtan, and fruits as offerings.

First of all, sit in Infront of idols and pray to Shri Ganesha for removing obstacles, then recite these mantra for Gauri and Shiva:

After sthapan and pujan, do the shodashopchar poojan vidhi followed by deep and dhoop. Reading Hartalika teej vrat katha followe by aarti is a major aspect of this pooja.

After that, recite this mantra and do the nirahar upvaas.

The second day after Parana and puja, break your fast. One can also give ahuti of ghee and sesame seeds. You can also give food items to the needy first and after that have your food.

Hartalika is made up of two Sanskrit words ‘Harit’ i.e. abduction and ‘Aalika’ means female friend or Sakhi. Female friends of Goddess Parvati helped her to escape to the forest to save her from marriage against her will. In that way, they helped Mata Parvati, so that she can perform severe austerity to seek Lord Shiva as her husband.

The Vrat Katha starts with the conversation between Lord Shiva and Goddess Parvati. Once upon a time in a beautiful valley of Kailash parvat, Maa Parvati asked Lord Shiva what is the secret of getting knowledge in a very short span. What good deeds have I done to get you as my life partner?

Then Lord Shiva answers her better half by telling a story of her severe penance that led them to get married to each other. Maa Parvati was the daughter of the king of Himalaya. Since childhood, she was performing hard penance as she wanted Lord Shiva as her husband. Because she was so absorbed in her devotion, she became very feeble. By looking at her condition, King Himvan got worried about her and asked Narad muni for a solution. Narad muni told Himalaya to get her daughter married to Lord Vishnu. King was happy that my daughter would be very lucky to have Lord Vishnu as her husband, He agreed to the marriage

Knowing her father’s will, Goddess Parvati, got very sad and asked her friends for their help. Her friends after knowing her serious love for Lord Shiva agreed to save her from marriage against her will. Because Lord Shiva was ascetic, Mata Gauri has to perform severe austerity to get his attention. So her female friends took Mata Parvati to the thick forest. She started her austerity on the banks of river Ganga. After many years of serious penance, Lord Shiva gave her a boon to be her husband.

King Himvan thought that she got abducted. When he found out about her daughter’s intentions, He agreed to marry her to ascetic Lord Shiva. that’s how by doing penance for many years and by eating only leaves, her wishes got fulfilled.

To get the fulfillment of wishes, a woman should do Hartalika fast as Mata Gauri did for Lord Shiva. Just as a mother attained Lord Mahadev by doing such severe penance, similarly, by observing Hartalika for one day, one attains the same virtue as her. By just only hearing this Katha, one can get more virtues than by performing Ashwamedha yagna.